The one battle during the 1798 Rebellion that Laurence Butler is known to have participated in, the Battle of Tubberneering during which he reportedly carried the colours, was described in detail by Miles Byrne in his Memoirs. 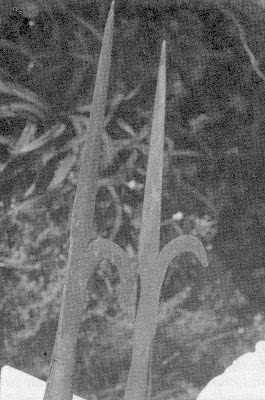 “The halt of the 2nd and 3rd June at the camp of Carrigrew Hill was considered necessary to afford time to those who had gone to enquire about their families on their way back from Wexford, to rejoin the camp. These two days were well spent preparing for new combats, and in acquiring accurate information as to the strength of the enemy, and the respective positions and towns where they were concentrated. This information was soon obtained from the poor people who had to fly and escape from their homes before the king’s troops that were marching on and devastating everything as they passed. Early on the morning of the 4th of June it was known that four divisions, each with artillery, and accompanied by several corps of yeomen cavalry, were marching to attack our camps at Carrigrew; one division from Carnew, one from Newtownbarry, and two other divisions were coming on two different roads from Gorey. General Loftus commanded the centre division; the division on his left was commanded by Colonel Walpole, and all these divisions were to arrive and attack the hill at the same moment.

Our little Irish army consisting now of about ten or twelve thousand men, and scanty supply of powder and ball for our fire arms, and without either cavalry or artillery with the exception of a few gentlemen farmers who were still tolerably well mounted, as “all” their horses had not been taken by the Orangemen.

We had to prepare for battle and to make head against all those regular forces, that were on march to annihilate us and drive us into the sea. It was at once decided by all the chiefs assembled, Father John Murphy and others, to march and attack the division of the king’s troops coming from Gorey; to take the town if possible and release the second batch of prisoners confined there, before the cruel magistrates could have time to have them executed.

About nine o’clock in the morning of the 4th of June, our army was drawn up in line in Mr Donovan’s domain near Carrigrew Hill, and I must say, in a more military order than usual. The line being now broken into column and an advanced guard of two or three hundred men formed, some of whom were mounted, orders were given to march on the road to Gorey; the advanced guard, flanked by some good sharp shooters, set out in good order and preceded the column at the distance of a mile: I made part of this advanced guard, and almost all my friends and relations that I met at the camp made part of it also. We marched in good order, until we arrived near Tubberneering, where the road leading to Gorey turned a little to the left and formed a kind of elbow. At this turn or point of the road, we perceived the English army drawn up in line of battle; their artillery all placed ready to fire. Instantly one of our mounted men was sent back to apprise the head of our column of this circumstance; but before he had time to go far, a discharge of the enemy’s artillery and musketry sufficiently shewed where they were in a position to receive us. We had a great number killed and wounded by this volley; still we kept our ground and advanced through a large field to take advantage of a ditch (a hedge) that lay between us and the enemy at our left flank and which brought us within half a musket shot of them. But this manoeuvre cost us dear. Whilst crossing this field, our men were literally mowed down. My first cousin Pat Bruslaun had a part of his thigh cut away with the grape shot, and on my other side, I saw several I knew fall and amongst them, Ned Doyle who had been for many years a servant at my father’s house: he received a musket ball through the thigh, but soon recovered from his wound and fought in many battles afterwards with double courage. Once we got to our new position, being so very near the enemy, we had less to fear, as we could bring more readily our pikemen into action; our men with the fire arms having a kind of breast work in front, kept up a well-directed fire, every shot of which must have told.

Whilst we thus occupied the enemy, our column or main body in the rear formed their line of battle, which extended much to our left flank, advanced in a kind of half moon or crescent. Colonel Walpole seeing this manoeuvre, and not finding General Loftus’s division yet in sight, and which was marching on his right flank, in order to gain time for this division to arrive, ordered a retreat: but the moment the fire of his cannon had ceased, we sallied out, ran on the artillery, and before the drivers had time to put to the horses, had captured three pieces of six pounders, with cases of ammunition, and in short everything appertaining to this artillery.
The drivers and gunners were treated with respect, but though prisoners, they were obliged to shew the men under whose guard they were left, how to manoeuvre and manage this artillery.
Nothing could equal the enthusiasm of our line of battle, not marching, but running to the assistance of the advanced guard; particularly so when they saw the fine park of artillery which had fallen into our possession; they very naturally thought the battle was completely gained; but they had still to fight another not far distant from thence, as Colonel Walpole halted and rallied his troops at Clough, about a mile from the rear from Tubberneering, where he was joined by a hundred grenadiers, sent to them by General Loftus. With this reinforcement he expected to be able to keep his position until the general himself with his entire division came to his assistance.
It is only justice to the memory of this unfortunate man to say, that he displayed the bravery of a soldier and fought with the greatest perseverance in his critical situation: but he was soon overpowered by our men, now so flushed with victory, that nothing could retard their march onwards. Walpole was nearly surrounded by our forces that out-flanked him before he fell. We saw him lying dead on the road, and he had the appearance of having received several gun-shot wounds. His horse lay dead beside him, with a number of private soldiers dead and wounded. His troops now fled in great disorder and could not be rallied: they were taken by dozens in the fields and on the road to Gorey. After they had thrown away their arms, accoutrements and every thing to lighten them, they were yet overtaken by our pikemen. It was curious to see many of them with their coats turned inside out; they thought no doubt by this sign of disaffection to the English, that when made prisoners, they would not be injured. But this manoeuvre was unnecessary, for I never heard of a single instance of a prisoner being ill-treated during those days of fighting: our men were in too good humour to be cruel after the victory they had obtained.

Although the battle was gained at Clough and the king’s troops in full retreat, still there were two things to be feared and to be guarded against; first, that the cowardly yeomen who did not venture to take part in the action, would have time to massacre the prisoners who were confined in vast numbers in Gorey, particularly those who were placed in the market house loft in the main street, through which these ferocious men were to pass; secondly, it was to be feared that the infantry escaping might have time to get into some isolated house and there barricade themselves until reinforcements came to relieve them. To obviate these two disasters, we decided to pursue them so rapidly as not to afford them time to do either. From Clough to Gorey, a distance of several miles, we never allowed them to rally or make the least resistance, and so arrived in the town of Gorey at their heels. They had only time to fire through the windows where the prisoners were confined. Fortunately Esmond Kyan who was one of them made them all lye down quite flat on the floor, the moment he perceived the enemy approaching, and by this precaution, both he and his fellow prisoners escaped, for none were wounded. I must here say, without vanity, that I never before felt so proud, or happier that I did on this occasion, to think that I was among the very first of our forces who contributed to save the lives, and put at liberty, so many brave men.

Kyan, though he had lost an arm some years before, being well instructed in gunnery, went instantly to the hill or rising ground above the town, where our camp was pitched and immediately took charge of our newly acquired park of artillery. He soon had the honour to fire the first salute with this cannon, when General Loftus appeared in sight with all his forces to attack us, which made this over cautious general quickly disappear. Seeing this volley so well directed, he naturally thought that he had approached too near our camp and thereby ran the risk of having his artillery captured also. But fortunately for him, our men were quite exhausted, not having had time to repose of take refreshments of any kind during the day, otherwise he would have been pursued and probably forced to leave some of this cannon behind him. A few of our men who were pretty well mounted, were sent after Loftus’s division to see what direction it had taken. These men soon returned and told us, that the king’s troops were mot marching but running away on the road to Carnew.

The result of this day’s fighting was incalculable for our cause; to see such number of fine fellows rushing into the greatest danger for the love of their country and its independence, as military discipline as yet could scarcely be expected to prevail. I wish I could recollect all their names, to mention them in this narrative, as a small tribute to the memory of such true patriots, who risked every thing that was dear to them on earth to see Ireland as she ought to be. The very inaccurate accounts published of the battle of Tubberneering or Clough, by persons, who evidently were not there, oblige me to be more particular in mentioning all that came within my own knowledge during that memorable day, the fourth of June 1798. That day the great power of the pike as a war weapon, if the men are properly disciplined, was fully shewn.”  [i]