'Victory has a thousand fathers but defeat is an orphan' (proverb)

Laurence Butler was arrested sometime after the Rebellion was quashed, and placed in Wexford Gaol. According to a witness at his trial, he was 'taken up a long time ago', and that he somehow 'broke out' of the gaol, or 'got out some way or another', and returned to his home in Ferns. He was once again arrested and faced a trial by Court Martial on the 10th of December, 1800. His record of arraignment is in the National Archives Ireland (Ref: 620/17/25: 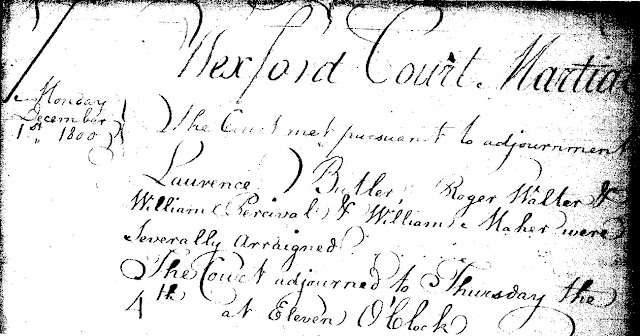 NB. The three Percival brothers and William Maher, arraigned on the same day as Laurence, appeared at Court on the 4th December 1800 for their case, charged with robbery, and the case was adjourned until the 9th December which then proceeded and was recorded. Strangely, Laurence Butler's case did not appear in the Archives records, even though it proceeded on the following day, the 10th December at the same Court.

A copy of the manuscript of his trial proceedings was found in the National Library of Ireland (Ms17,795 (4). According to the library, the library received this material in 1973 from a Dublin bookseller who previously had sold it to a priest who had subsequently sold it back to the same bookseller, and the bookseller evidently got the material originally from some solicitor's papers. Although the format indicates it is a copy or transcript of the trial proceedings, the handwriting, particularly the letter 'd', indicates it is of considerable age, as does the condition of the document, and could even be contemporary with the time of the court martial.
The following is the transcript of his trial. Butler represented himself and would call five witnesses. Unfortunately, it does not include the findings of the Court, only the witness statements.

Crime: Laurence Butler charged with aiding, abetting and assisting the Murder of George Grimes on or about the 29th of May 1798 and also with having acted as a Rebel Captain during the Rebellion

Qn: Did you know George Grimes?
An: I did, he was my son

Qn: Is he living or Dead?
An: He is Dead he was Murdered

Qn: Do you know how he came by his Death?
An: He and I were standing at our Door when a Party of Rebels armed with Pikes came up and Murdered him

Qn: Do you know any of the Party that committed the Murder?
An: I saw Lawrence Butler the Prisoner on horseback amongst them

Qn: Was Butler armed?
An: I did not see arms with him

Qn: Did you see him do any act?
An: Nothing; but he appeared to me to be the Commander. There was enough to take my Son’s life, without his assistance- When my son was killed the man that gave him the first stab began to break the windows and furniture. Butler cried out then ‘Enough Done. Let’s away’.

Qn: Where do you live?
An: About a Mile from Ferns in a ___ House. My son was a yeoman in Captain Richard’s Corps

Qn: Where was Butler when they were killing your son?
An: He was in the yard

Qn: What day was this?
An: On Whitsun-Tuesday

Qn: Do you remember Whitsun-Tuesday in the Rebellion?
An: I do

Qn: Did you hear any conversation amongst the Rebels relative to George Grimes?
An: I did. When I was in Ferns, I heard the cry of the Town that Grimes had killed one Carton and if he was not taken care of he would ruin the Country- the Rebels then set out for Vinegar Hill, I went with them. They went a road to avoid Mr Grimes house- a Man then rode up that the Rebels said was Larry Butler they then turned about and went to Grime’s house where I saw them put him to Death.

Qn: On your oath would you know the man that the Rebels called Lawrence Butler if you saw him?
An: On my oath I would not. I never saw him before or since- he was on horseback

Qn: Did you hear him give any orders?
An: I did not

Cross-Examined by the Prisoner-
Qn: Did not you come and take me Prisoner on that very morning. I have a right to know you well?
An: I did not. I never knew where your house was. I never saw you until the time you came up.

Qn: by the Court- Is that the man that came up?
An: I cannot say

Qn: Do you remember the day George Grimes was killed?
An: I do

Qn: Did you see the Prisoner Lawrence Butler that day?
An: I did

Qn: What did you see him do that day?
An: I was afraid to stay within my Cabbin and stayed a short Distance from it. I saw Lawrence Butler go into my house. I walked in after him, he stood over the fire taking up a Coal which he put into a wooden Bowl, on going out he said they should go to Grimes’s to get satisfaction for what was done to their men, that they had twenty good men

Qn: Did he say what he was to do with the fire?
An: He said Clone Houses were to be burnt

Qn: Were there houses burnt that Day?
An: They were

It being 3 o’clock the Court adjourned

Prisoner Defence- He gives in a written Defence, which he requests may be annexed to those Proceedings

Qn: Where were you when Mr Graham was murdered? (viz. Grimes)
An: I was two fields off and could not tell one man from another

Qn: Where were you during the Rebellion?
An: I was mostly at your house

Qn: Do you know of my having been taken away by force?
I do not, I was in a back house, but your wife told me you had been forced away

Qn: Do you know of my having been called and be any title as an Officer?
I do not

Examined by the Court
Qn: When did the Prisoner return home?
An: On Whitsun-Tuesday night the day he was taken away

Qn: Was he attended by a guard?
An: He was not

Qn: When did he go away again?
An: I believe the next day

Qn: Was he forced away then?
An: He was not

Qn: Where do you live?
An: At Ferns next door to the Prisoner

Qn: Did the Prisoner come home after the Rebellion?
An: He did

Qn: Do you know when the Prisoner was first taken up?
An: It was a long time ago

Qn: Did you hear and do you believe that the Prisoner broke out of the Gaol of Wexford?
An: I do not know whether he broke out, but he got out some way or other

Qn: Did you see me in the Rebellion?
An: I saw very little of you

Qn: In what capacity did I act?
An: I recollect seeing you but once. You then came into my House and behaved as usual. I was in bed, it was in the night about 10 o’clock

Qn: by the Court- Did you ever hear that the Prisoner had a Command during the Rebellion?
An: I heard that he carried Colors at the Battle of Tubberneering

Qn: Was the Prisoner considered in Ferns as an active Rebel or otherwise?
An: During the Rebellion I did not hear much of him, afterwards I heard he was rather active

Qn: Had you an opportunity of seeing me during the Rebellion?
An: I had

Qn: In what capacity did I act?
An: You got me a Protection from Murphy the Priest. I do not know what Command you had, you carried Colors

Qn: Do you think I carried them willingly?
An: I cannot say

Qn: Where were you on Whitsun-Tuesday in the Rebellion?
An: At Ferns in your house

Qn: Did you see me taken Prisoner?
An: Mat Cavanagh a Rebel with a Party came and took you from out of house, you hiding under a bed

Qn: How far did you see me taken?
An: As far as Clone

Qn: Did you see me go into any house?
An: I did not, they would not let you. They said you were not United and that it was not safe to have you amongst them

Qn: Do you remember how I got home?
An: I saw you come home with a Woman’s cloak about you. I heard it was by the help of that Disguise you got off

Qn: Did you see me the Battle Day of Tubberneering?
An: Jim Irwin and Paddy Connors came and said that They ___ would ___ (can/come?) (NB. The document is torn) where you should not run away as you did before and you should carry the Colors, which they made you do

Qn: Was the Prisoner on horseback as he went to Clone?
An: He was on horseback, as was some of the Rebels

Qn: Was there a Guard on him?
An: There was

Qn: Did you go with the Prisoner as far as Dorans bridge?
An: I did

Qn: Did you see the Houses of Clone set on fire?
An: I did see four

Qn: Was the Prisoner in your sight the whole time from the moment you left Ferns until the Houses were set on fire?
An: He was. I was by his side and he took no part in setting them on fire

Qn: Could the Prisoner have gone into a House and brought fire out of it without your knowledge?
An: He could not, nor did he do so

Qn: When were you summoned?
An: Yesterday, by a Man I do not know

Qn: Had you and that man any conversation about this Trial?
An: Not one word, but he said I was to come on Butlers Trial

Qn: Did you ask him what Butler was to be tried for?
An: I did and he said he did not know

Qn: And what hour was the Prisoner taken from Ferns?
An: About 10 o’clock

Qn: Where was the Prisoner when Grimes was killed?
An: He was within two yards of him

The manuscript ends at this point. No final judgement or sentence is attached. However, Laurence Butler's Convict Indent Papers state that he was given a life sentence and transportation to the Colony of New South Wales.
Kevin Whelan in his Chapter “The Religious Factor in the 1798 Rebellion” in “Rural Ireland 1600-1900: Modernisation and Change”, p.72 states that the man Grimes killed, named Carton, was from Ballycarney, a blacksmith suspected of making pikes. Grimes was in the local yeoman militia.

At one stage the questioner named the victim as 'Mr Graham' instead of 'Mr Grimes'. Notably in Musgrave’s “Memoirs” Appendix No XIX, 9, page 754: Protestant inhabitants of the parish of Ferns, murdered in the rebellion: ‘George Graham, farmer and miller, murdered in his own house, killed by Father John Murphy’s party’. However, the Protestant Registers of Ferns, Co. Wexford in the RCB Library in Dublin also has a list of Protestants of this Parish (Ferns) murdered by the Rebels during the time of the 1798 Rebellion: ‘George Graham, Goorey’, yet listed in the Parish of Ferns, not Parish of Gorey. Notably George Grimes is not on either list, so it is prossible the names ‘Graham’ and ‘Grimes’ refers to the same person.